Tuesday 3 May 2022
An All-Star Gala in aid of the launch of:
The Sondheim Foundation

The evening, which takes place for one night only on 3 May 2022 at 8pm, will be staged by Matthew Bourne and Maria Friedman with choreography by Stephen Mear and a 26-piece orchestra conducted by Alfonso Casado Trigo. 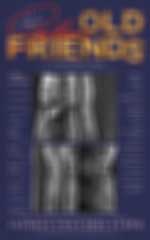 Patrons can sign up for priority booking at sondheimoldfriends.com.  Tickets will go on sale on 15 March to DMT+ members at 11am, the Priority List at 12noon with Public Booking opening at 1pm.

Cameron Mackintosh said: “It is impossible to overstate the influence and contribution Stephen Sondheim has made to Musical Theatre, both personally and professionally. He was as great a teacher as he was an incomparable writer and the Little Things that he did for so many people forged legions of friendships throughout his long life. I was lucky enough to be Steve’s friend and occasional collaborator for over 45 years since I first produced Side By Side By Sondheim and the Wyndham’s Theatre in 1976. It was a friendship full of laughter, gossip and glorious insightful camaraderie.

"Steve was so prolific and profound as a writer that it’s impossible to put together a definitive list of his greatest songs, as everyone has their own favourites, so our choice of songs will purely reflect the joy and love I have for one of the greatest Broadway Babies of all time.”

All profits from the evening will go to the Stephen Sondheim Foundation, which the legendary composer and lyricist established under his will to receive future income from his copyrights and intellectual property, with the proceeds to be used principally for the support of playwrights, composers, and lyricists in the early stages of their careers to assist in the development and advancement of their work, as well as for sustaining other aspects of the musical theatre craft and arts education.

Until the Stephen Sondheim Foundation has completed the process of its formation, the proceeds derived from this event will be held in trust by The Mackintosh Foundation (registered charity number: 327751) on its behalf.

Subscribe to our newsletter to receive the latest news and special offers from Delfont Mackintosh Theatres.