How to find the Noël Coward Theatre

Central Box Office at the Sondheim Theatre
Buy tickets for productions across all 8 of our theatres!

Please note: You may not bring any food or drink purchased elsewhere to our theatres. All our theatre bars serve drinks and snacks, but not hot food.

Our theatres sell products which may contain allergens. Allergen information is available upon request from all bars or other staff selling refreshments around the venue.

Getting to the Noël Coward Theatre

By Train or Tube

If you are driving, you can take advantage of the Q-Park Theatreland parking scheme with 50% off car parking after midday for up to 4 hours.

There is also parking available at MasterPark Trafalgar Square and NCP at Upper St Martin's Lane.

Accessibility at the Noël Coward Theatre

The theatre itself has no parking facilities but there are disabled bays nearby on St Martin's Lane or Charing Cross Road. For more information visit the City of Westminster website.

The theatre has an infrared system with headsets available at the Cloakroom. The duty manager in the Foyer will be able to assist with headsets. A deposit of a credit card/driving licence is required which will be returned at the end of the performance.

Assistance dogs are allowed in to the auditorium. Alternatively, our staff are happy to dog sit during your performance.

There is a ramp (gradient 30-40%, approximately 70.4cm in width and with a handrail on both sides) through the front door on St Martin's Lane. Box M (door 68cm wide) has 2 spaces for wheelchair/scooter users who need to stay in their chair (or 1 wheelchair user and a companion). Companions can also be seated in the Royal Circle. Box L has space for a standard manual wheelchair. Wheelchair transfer seating is available via a small number of steps to any aisle seat in Royal Circle. Wheelchairs can be stored in the cloakroom, scooters in the foyer.

There is an adapted toilet near the foyer close to the Royal Circle boxes. There are two steps up to a ladies toilet from the foyer. There are toilets situated on all levels of the auditorium.

Our access host will happily advise and guide should you require help.

We know that communication is key for patrons who have Autism.

We want all our patrons to have a good experience while in our theatres, so we now have a visual tool for parents and carers to use with those on the autistic spectrum and/or with learning difficulties.

There are two versions. A printable version and a video version, both of which can be viewed via the links below.

We have been researching the benefits of using social stories and would like to offer a social story for a visit to Noël Coward Theatre. We know that people with autism find social situations difficult and understand that we are all unique.

Hospitality at the Noël Coward Theatre

Champagne Packages start from £137.50 per person and can include a Premium Seat, half a bottle of Champagne, a show programme, a souvenir brochure (where applicable) and a staff meet and greet service.
Find out more

Opt for the full VIP treatment from £192.50 per person, which can include a Premium Seat, half a bottle of Champagne, a show programme, a souvenir brochure (where applicable) specially designated hospitality area, savoury canapes, your choice of drinks and a theatre host.
Find out more

There are two VIP rooms available for hire at the Noël Coward Theatre.
If you would like to discuss venue hire then please enquire using the button below:

Facilities at the Noël Coward Theatre

If you have any enquiries regarding lost property at Noël Coward Theatre please email customer services.

Lost property will be kept at the theatre for one month.

The theatre has three licensed bars; Noël’s Bar in the Stalls area, Lionel’s Bar in the Royal Circle/Stalls level and the Albery bar in the Grand Circle level

For a look at what great value drinks and snacks we offer and an example price list please available to download/view below:

For the safety and security of our patrons and employees, our cloakrooms are currently closed.

However, we work with Stasher who offer bag storage in many hotels and shops across London (all within close walking distance to our theatres).

HOW TO BOOK LUGGAGE STORAGE WITH STASHER

Bookings must be made online and it costs £5.40 for the day using the code "SHOWTIME".

For location options and to book:

Delfont Mackintosh Theatres uncompromisingly prioritises the safety of its staff and visitors to all of its venues.

We have engaged the expertise of Global Support Services (GSS), a specialist canine services provider, to deploy explosive detection dog teams at our theatre. Their teams will be responsible for searching our venue and our audiences as they enter the venue prior to each show, daily.

Their teams have vast experience working with venues similar to ours and will seek at all times to be both reassuring and unintrusive. They have provided us with some guidance on our behaviours around their dogs whilst they are working. 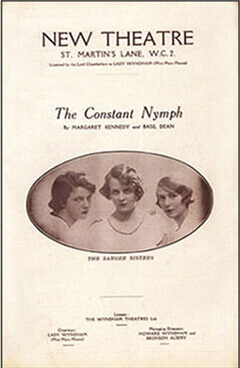 1903 The New Theatre opened with a revival of Rosemary by Louis N Parker and Murray Carson in which the co-directors Sir Charles Wyndham and Mary Moore starred.

1905 Fred Terry and Julia Neilson first staged The Scarlet Pimpernel here. It proved so popular that it was revived annually for seven years.

1920 Noël Coward made his West End debut as Bobbie Dermott in his own play I'll Leave It to You.

1924 Sybil Thorndike created the role of Joan in G B Shaw's play Saint Joan. It was described by the Daily Mail as 'one of the great performances of our time'.

1926 Margaret Kennedy and Basil Dean's play The Constant Nymph had a great success with both Noël Coward and subsequently John Gielgud taking the part of the composer Lewis Dodd.

Please note: You may not bring any food or drink purchased elsewhere to our theatres. All our theatre bars serve drinks and snacks, but not hot food.

Our theatres sell products which may contain allergens. Allergen information is available upon request from all bars or other staff selling refreshments around the venue.

For your comfort and security, you will be subject to additional checks on your visit - we appreciate your patience and understanding while these are taking place. Please note that latecomers will not be admitted until a suitable break in the performance.

Subscribe to our newsletter to receive the latest news and special offers from Delfont Mackintosh Theatres.