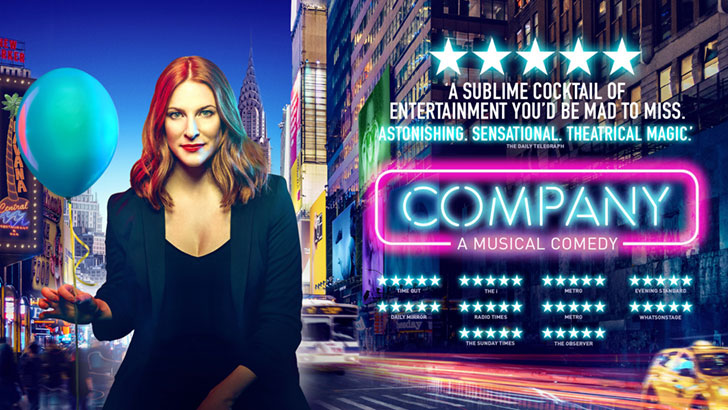 Joining them are the actors playing Bobbie's three boyfriends: RICHARD FLEESHMAN as Andy, GEORGE BLAGDEN as PJ and MATTHEW SEADON-YOUNG as Theo. All three characters have been re-gendered for this new production, which includes their classic song You Could Drive a Person Crazy. Stephen Sondheim has renamed the roles. Andy was originally April, PJ was originally Marta and Theo was Kathy.

Richard Fleeshman is currently starring in the UK and Ireland tour of Sting's new musical, The Last Ship. His many other credits include: the lead role of Sam Wheat in Ghost the Musical on Broadway and in the West End, Legally Blonde the Musical, Guys and Dolls, Damsel in Distress and UrineTown: The Musical. His television work includes Call the Midwife, the lead role in the six part BBC series, All the Small Things, and Craig in Coronation Street.

George Blagden, is currently playing the lead role of Louis XIV in Versailles on BBC TV and playing Damis in Tartuffe at the Theatre Royal Haymarket. His other theatre work includes Jamie Lloyd's The Pitchfork Disney at Shoreditch Town Hall and Platinum at Hampstead Theatre. He played Grantaire in the film version of Les Misérables and other TV work includes Black Mirror: Hang the DJ (Netflix) and Athelstan in The Vikings.

Matthew Seadon-Young recently appeared in Sondheim's Assassins at the Gate Theatre in Dublin. His other stage work includes: Big Fish, Beautiful in the West End, Sweeney Todd for English National Opera and UrineTown: The Musical. He also appeared in the feature film, Pride.

Gavin Spokes starred in James Graham's play Quiz in the West End and at Chichester Festival Theatre. His other theatre work includes: Against at the Almeida Theatre, Carousel for English National Opera, he received an Olivier-award nomination for his role as Nicely Nicely in Guys and Dolls in the West End, 1984 at the Almeida and in the West End, Francis Henshall in the National Theatre production of One Man, Two Guvnors and Oliver Hardy in Laurel and Hardy at the Watermill. His TV credits include: Man Down and Utopia for Channel 4.

Richard Henders' National Theatre credits include The Beaux Stratagem, The White Guard and Trevor Nunn's productions of Anything Goes, Love's Labour's Lost and The Cherry Orchard, and John Caird's production of Candide. His TV work includes Warren in Kingdom, The Inspector Lynley Mysteries and Foyle's War.

Jennifer Saayeng's recent theatre credits include: Caroline, or Change at the Chichester Festival Theatre, Ragtime at the Charing Cross Theatre, Les Liaisons Dangereuses and City of Angels at the Donmar Theatre, The Etienne Sisters at the Theatre Royal Stratford East and The Color Purple at the Menier Chocolate Factory. Her TV work includes Vera, Eastenders and Emerald City.

Ashley Campbell recently played Sammy Davis Jr in The Rat Pack Live from Vegas at the Theatre Royal Haymarket. His other theatre credits include Sunny Afternoon in the West End, The Color Purple at the Menier Factory, Five Guys Named Moe at the Theatre Royal, Stratford East and he recently completed a season at the RSC in Much Ado about Nothing, Macbeth, The Rover and Two Noble Kinsmen. He features in the 2017 film: Mamma Mia: Here we Go Again! with Cher.

Ben Lewis is currently appearing as The Phantom in The Phantom of the Opera at Her Majesty’s Theatre in the West End. His many other credits include: Annie Get your Gun at the Crucible Theatre, Sheffield, Forbidden Broadway at the Vaudeville Theatre, Side by Side by Sondheim at the Theatre Royal, Sydney, A Little Night Music for Opera Australia, Monty Python's Spamalot and Priscilla, Queen of the Desert. Ben played the Phantom the filmed version of Love Never Dies.

At Bobbie's 35th birthday party all her friends are wondering why she isn't married; why she can’t find the right man and why she hasn't settled down to have a family. The multi-award winning musical comedy about life, love and marriage includes Stephen Sondheim's iconic songs, The Ladies who Lunch, Being Alive, Side by Side and You Could Drive a Person Crazy.

Marianne Elliott, Artistic Director of Elliott & Harper Productions, a company she founded in 2016 with producer Chris Harper, was awarded an OBE in The Queen's Birthday Honour's List 2018 for her services to theatre. Elliott is the first woman in Broadway history to win two Tony Awards for Best Director and her recent Broadway transfer of Tony Kushner's Angels in America received the 2018 Tony Awards for Best Revival of a Play, Best Actor (Andrew Garfield) and Best Featured Actor (Nathan Lane). Angels in America at the National Theatre also received the 2018 Olivier Award for Best Revival of a Play.

Marianne's ground-breaking production of The Curious Incident of the Dog in the Night-Time received 7 Olivier Awards in London, including Best New Play and Best Director and 5 Tony Awards for its run on Broadway, including Best Play and Best Director. It continues to tour internationally. Her production of Saint Joan earned her the Olivier Award for Best Revival of a Play and Pillars of the Community earned her the Evening Standard Award for Best Director. War Horse, which she co-directed, and has been seen by over 7 million people world-wide, and is on its second UK tour.