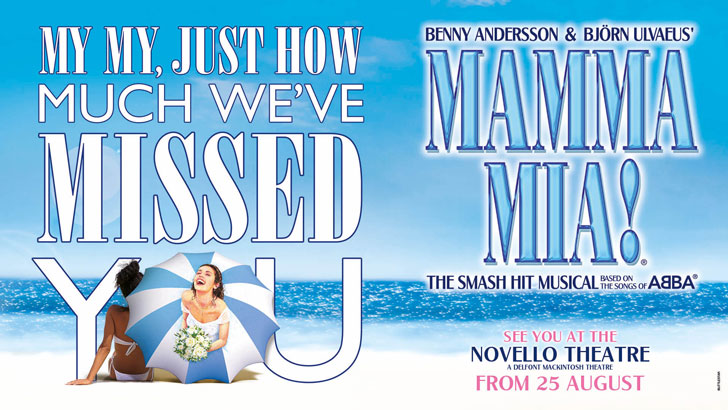 The global smash hit musical MAMMA MIA! celebrated its 20th anniversary in London's West End at the Novello Theatre on Saturday 6th April. Now, in the musical's 21st year, the producers are delighted to announce some major cast changes in the London production from Monday 10 June 2019. Mazz Murray, who has previously played Tanya in the London production, will be returning to the musical, but this time as Donna, and Kirsty Hoiles will join her as Tanya. Also new to the musical will be Cameron Burt as Sky, Melissa Nettleford as Ali, Sophie Matthew as Lisa, Taylor Bradshaw as Eddie and Danny Nattrass as Pepper. They will be joining Ricky Butt as Rosie, Richard Trinder as Sam, Neil Moors as Harry, Stephen Beckett as Bill and Lucy May Barker as Sophie. Caroline Deverill continues to play the role of Donna at certain performances.

Mazz Murray, who has previously played Tanya in the London production, will be returning to the musical, but this time as Donna.

Since premiering in London in 1999, the irresistible feelgood musical has captured the hearts of millions around the globe. The sunny, funny tale of a mother, a daughter and three possible dads on a Greek island idyll, all unfolding to the magic of ABBA's timeless pop masterpieces, has now been seen live on stage by 65 million people across the world, and turned into two record-breaking movies - MAMMA MIA! The Movie and MAMMA MIA! Here We Go Again.

MAMMA MIA! originally opened in London at the Prince Edward Theatre on 6th April 1999, before transferring to the Prince of Wales Theatre in 2004, and then to the Novello Theatre in 2012.

The London production of MAMMA MIA! has been seen by over 9 million people, played over 8,000 performances and has broken box office records in all three of its London homes. MAMMA MIA! is currently booking to Saturday 7th March 2020.

Produced by Judy Craymer, MAMMA MIA! The Movie became the highest grossing live action musical film of all time upon its release in 2008. A second film, MAMMA MIA! Here We Go Again, opened in July 2018 and is the most successful live musical movie sequel of all time.