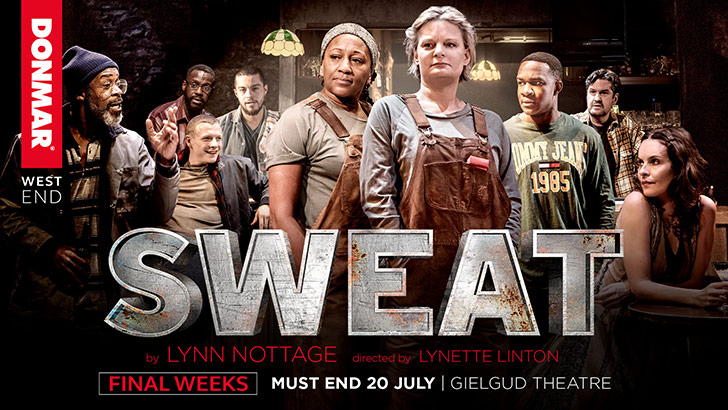 The Donmar Warehouse's sold-out production of the Pulitzer Prize-winning SWEAT by Lynn Nottage will transfer to London's Gielgud Theatre for a limited 6 week run from Friday 7th June 2019.

Martha Plimpton will reprise her role as Tracey in Lynette Linton's acclaimed production, with further casting to be announced.

Tickets will are on sale now.

Speaking about the transfer, SWEAT Playwright Lynn Nottage said: "I'm beyond thrilled that this beautiful and haunting production of Sweat will have the opportunity to be in dialogue with a larger audience in the West End."

Josie Rourke, Donmar Warehouse Artistic Director, said: "We are overjoyed to be able to bring Lynette Linton's scorching production of Lynn Nottage's great play to a bigger audience. We're grateful for the people who have worked to make it happen."

In 2011, Lynn Nottage began spending time with the people of Reading, Pennsylvania: officially one of the poorest cities in the USA.

During the following two years, she dug deep into the forgotten heart of middle America, finding a city divided by racial tension and the collapse of industry.

SWEAT is the Pulitzer Prize-winning play that Lynn Nottage wrote following her experience.

Centered around the friendships of factory workers and set in an all-American bar, the play explores the relationships, resentments and fears of a community left divided by de-industrialisation. Simmering racial tensions and mounting anger lead to a devastating outcome for the residents of Reading, Pennsylvania.

SWEAT is the first production of Artistic Director Josie Rourke's final season at the Donmar, followed by Berberian Sound Studio in February and her revival of Sweet Charity in April. SWEAT receives its West End transfer following its sold-out UK premiere at the Donmar Warehouse and is directed by Bush Theatre Artistic Director and former Donmar Resident Assistant Director Lynette Linton.

Lynn Nottage (Playwright) is a playwright and a screenwriter, and the first woman in history to win two Pulitzer Prizes for Drama. Her plays include SWEAT (Pulitzer Prize, Tony Nomination, Obie Award) which moved to Broadway after a sold out run at The Public Theater, Mlima's Tale (Outer Critics Circle Nomination), By the Way, Meet Vera Stark (Lilly Award, Drama Desk Nomination), Ruined (Pulitzer Prize, Obie Award), Intimate Apparel (American Theatre Critics and New York Drama Critics' Circle Awards for Best Play), Fabulation, or the Re-Education of Undine (OBIE Award), Crumbs from the Table of Joy, Las Meninas, Mud, River, Stone, Por'knockers and POOF!. In addition, she is working with composer Ricky Ian Gordon on adapting her play Intimate Apparel into an opera. She has also developed This is Reading, a performance installation at the Franklin Street, Reading Railroad Station in Reading, PA. She was writer/producer on the 1st season of Netflix's series She's Gotta Have It directed by Spike Lee. Nottage is a member of the Dramatists Guild, an Associate Professor at Columbia University School of the Arts, and the recipient of a MacArthur "Genius Grant" Fellowship, Steinberg "Mimi" Distinguished Playwright Award, Doris Duke Artists Award and PEN/Laura Pels Master Playwright Award among others.

Lynette Linton (Director) is the newly appointed Artistic Director of London's Bush Theatre and returned to the Donmar Warehouse after being Resident Assistant Director, assisting on productions including Knives in Hens with director Yaël Farber, The Lady from the Sea with director Kwame Kwei-Armah, The York Realist with Robert Hastie and Belleville with the newly appointed Donmar Warehouse Artistic Director Michael Longhurst. Lynette recently worked with Michael Grandage as Associate Director on The Lieutenant of Inishmore (Noël Coward). As director her productions include This is (Arts Ed), Assata Taught Me for which she received a Stage Debut nomination (Gate Theatre), Indenture (Dark Horse Festival), And Where There Once Were Two (Arcola Theatre), Assata: She Who Struggles (Young Vic), Chicken Palace (Theatre Royal Stratford East), Naked (The Vault Festival) and This Wide Night (Albany Theatre/Stonecrabs). Lynette is currently co-directing Richard II (Shakespeare's Globe) and will soon direct Function (National Youth Theatre). As a writer her credits include Hashtag Lightie (Arcola Theatre), Chicken Palace and Step (Theatre Royal Stratford East). Lynette was Associate Director at the Gate Theatre from 2016 to 2017, she is also a co-founder of production company Black Apron Entertainment.