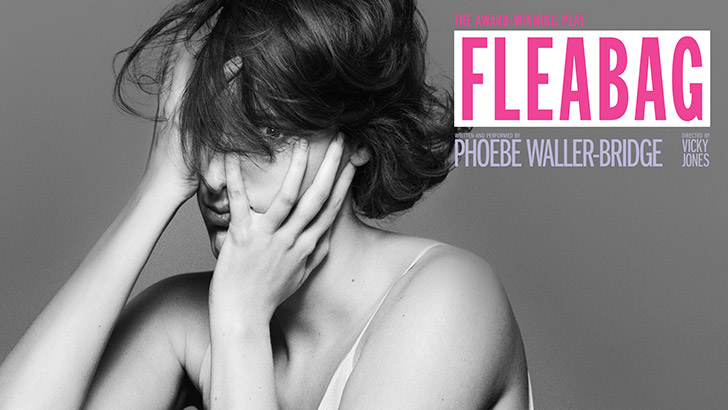 Written and performed by Phoebe Waller-Bridge
Directed by Vicky Jones

ONLINE LOTTERY: 50 SEATS AT £15 WILL BE AVAILABLE FOR EVERY PERFORMANCE VIA TODAYTIX

DryWrite, Soho Theatre and Annapurna Theatre have today announced three brand new ways to see the critically acclaimed, multi-award-winning FLEABAG in the West End this summer. There will be a live cinema broadcast of the production on 12th September, an online lottery for £15 tickets to every performance of the show and £10 standing tickets which are to be made available at box office daily. The production runs at Wyndham’s Theatre from 20th August – 14th September.

FLEABAG will be broadcast live to venues around the UK and internationally on 12th September at 7.30pm with National Theatre Live. For more information on where to watch and how to buy tickets, audiences are advised to check with their venue or the NT live website.

A digital lottery will be available through the TodayTix app. A total of 50 tickets for each of the 30 performances (1,500 in total) will be available for £15. The FLEABAG lottery will be held weekly during the season, with the first one opening on Monday 12th August and closing on Wednesday 14th August, enabling users to apply for multiple performances at the same time. To enter the lottery, users must download the free TodayTix app, and register. All TodayTix users will be notified when the lottery opens and winners will have the choice to purchase either one or two tickets. Seats allocated for the lottery will include prime positions in the front row. Please see the lottery schedule below for full details.

There will also be a limited number of £10 standing seat tickets available to purchase each morning, in person from 10am at the Wyndham’s Box Office. Each person will be permitted to purchase one ticket each and are subject to availability.

The critically acclaimed, multi-award-winning FLEABAG will play the West End for a strictly limited four week run this summer. Written by Phoebe Waller-Bridge and directed by Vicky Jones, the one-woman show recently played to a sold-out house Off-Broadway in New York, and premiered its second season on BBC Three to universal acclaim. The homecoming run will be the last time Waller-Bridge will perform the piece. The play will begin previews on 20th August 2019 with an opening night on Wednesday 28th August 7:30pm at Wyndham’s Theatre.

FLEABAG was originally produced by Phoebe Waller-Bridge, Vicky Jones and producer Francesca Moody’s company DryWrite. It previewed at Soho Theatre before its Edinburgh Festival debut in 2013, winning rave reviews and a Fringe First Award. It returned to play the Soho Theatre in London that autumn and was revived by DryWrite and Soho Theatre in 2014 and 2016, as well as touring the UK (2015 and 2018), South Korea (2014) and Australia (2018) and an Edinburgh Festival revival as part of the British Council Edinburgh Showcase (2017). The production also won The Stage Best Solo Performer Award, the Off-West End Award for Most Promising New Playwright and Best Female Performance, and was nominated for an Olivier Award and an Evening Standard Award. In 2019, Annapurna Theatre produced the New York Off-Broadway premiere, co-produced by DryWrite and Soho Theatre. The extended, sold-out New York run earned Waller-Bridge a Drama League Award nomination for Distinguished Performance, a Lucille Lortel Award nomination for Outstanding Solo Show, and a Drama Desk Award nomination for Outstanding Solo Performance.

FLEABAG was adapted into a BBC Three Television series in partnership with Amazon Prime Video in 2016 and earned Phoebe a BAFTA Award for Best Female Comedy Performance. The series was also nominated for a Gotham Independent Film Award, Television Critics Association Award and Critics Choice TV Award, among other accolades. The BBC and Amazon renewed the series for a second season, which premiered on BBC Three and Amazon Prime Video earlier this year. Waller-Bridge also created and wrote the first season of the celebrated BBC America television series “Killing Eve,” which was nominated for an Emmy, Golden Globe and 15 BAFTA TV Awards. FLEABAG and Phoebe Waller-Bridge received several 2019 Emmy nominations on Tuesday, including Outstanding Comedy Series, Lead Actress in a Comedy Series and Outstanding Writing for a Comedy Series.

FLEABAG is a rip-roaring look at some sort of woman living her sort of life. Fleabag may appear emotionally unfiltered and oversexed, but that’s just the tip of the iceberg. With family and friendships under strain and a guinea pig café struggling to keep afloat, Fleabag suddenly finds herself with nothing to lose.

FLEABAG is produced by DryWrite, Soho Theatre and Annapurna Theatre.

The FLEABAG lottery will be drawn as follows: