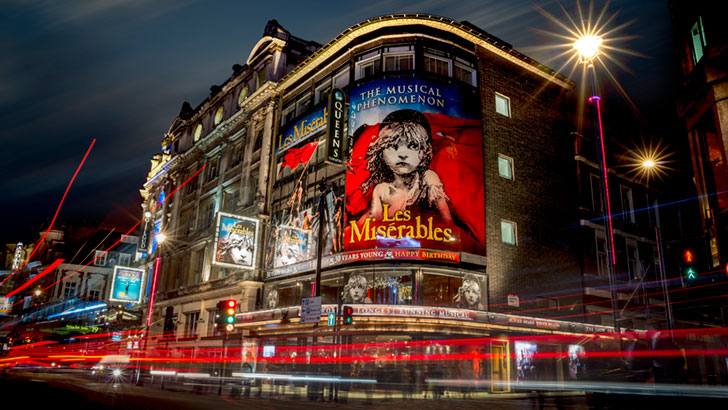 Cameron Mackintosh today (5th July 2019) announces he is delighted that in honour of Stephen Sondheim’s 90th birthday next March, the Queen’s Theatre will be renamed the Sondheim Theatre, making him the only living artist to have a theatre named in his honour both in the West End and on Broadway. Following the renovation of wartime bomb damage and a major restoration of the auditorium and the complete backstage, the newly named Sondheim Theatre will continue as the home of world’s longest running musical LES MISÉRABLES as it enters its 35th year.

Cameron Mackintosh said: “I have been lucky enough to have been a friend and colleague of Steve’s since our first collaboration in 1976 on the musical revue Side by Side by Sondheim at the Wyndham’s Theatre. After 112 years Shaftesbury Avenue will have a theatre named after a living legend and house the world’s longest running musical, the legendary Les Misérables as it enters its phenomenal 35th year. As an innovative voice in musical theatre, his influence has no equal. Sondheim’s work will undoubtedly be performed as long as audiences want to see live theatre, so I feel honoured that he has agreed to have his name on one of my Shaftesbury Avenue theatres to salute his upcoming 90th birthday. Over the decades his work has become increasingly appreciated and performed by all, both as part of the popular theatre and classical repertoires and in spaces that range from a pie shop to the Royal Opera House. His love of theatre is unquenchable and throughout his career he has been an exceptional champion of so many young creatives as well as supporting numerous productions worldwide, especially here in London. When Les Misérables re-opens in December with the new production, the re-built and restored theatre will be re-named the Sondheim Theatre – a perfect companion to the Gielgud Theatre next door, named after the great actor John Gielgud, and the Coward and Novello Theatres, named after the two celebrated British writers and composers. For the past 25 years I have tried to build a studio theatre in central London named after Sondheim, but it wasn't to be. I felt this major refurbishment of a building that has housed his brilliant work was the perfect moment to put his name “on some marquee all twinkling lights - a spark to pierce the dark”. Stephen Sondheim has always been that spark to all of us. Even as an eight-year-old boy dreaming about becoming a producer I could never have dreamt a dream like this or be happier.”

Stephen Sondheim said: “I have loved British Theatre since I saw my first play here in 1958. I have treasured Cameron Mackintosh’s support and friendship ever since he produced Side by Side by Sondheim in 1976. Cameron is synonymous with British Theatre, so the confluence on this occasion is truly exhilarating. I am chuffed, as you say in British English, to a degree I wouldn’t have imagined. Or as we say in American English, it’s awesome.”

The Queen’s Theatre originally opened on 8th October 1907 with The Sugar Bowl, a comedy by Madeleine Lucette Ryley and was designed by architect W.G.R. Sprague as a pair with the Gielgud Theatre on the adjoining corner of Shaftesbury Avenue. On 8th July 1959 the theatre reopened with John Gielgud's Shakespearean recital Ages of Man. Architects Westwood Sons & Partners reconstructed the building at a cost of £250,000, with Sir Hugh Casson acting as consultant on the décor. On 13th July 2019 the theatre will close for four months of rebuilding work both backstage and in the auditorium. This work will also restore W.G.R. Sprague’s original boxes and loges which, along with the entire front of house, were destroyed by a bomb in 1940 and caused the theatre to be closed for 20 years. The restored theatre will be returned to its pre-war splendour, reopening on 18th December 2019 as the Sondheim Theatre.

Stephen Sondheim wrote the music and lyrics for Saturday Night, A Funny Thing Happened on the Way to the Forum, Anyone Can Whistle, Company, A Little Night Music, The Frogs, Pacific Overtures, Sweeney Todd, Merrily We Roll Along, Sunday in the Park With George, Into the Woods, Assassins, Passion (which played the Queen’s Theatre in 1996) and Road Show, as well as lyrics for West Side Story, Gypsy, Do I Hear a Waltz? and additional lyrics for Candide, Side by Side by Sondheim, Marry Me a Little, You’re Gonna Love Tomorrow, Putting it Together, Moving On and Sondheim on Sondheim are anthologies of his work as composer and lyricist. For films, he composed the scores of Stavisky, co-composed Reds and wrote songs for Dick Tracy. He also wrote songs for the TV production Evening Primrose, co-authored the film The Last of Sheila and the play Getting Away With Murder and provided incidental music for the plays The Girls of Summer, Invitation to a March, Twigs and The Enclave.

Stephen Sondheim is on the Council of the Dramatists Guild, the national association of playwrights, composers and lyricists, having served as its President from 1973 to 1981, in which year he founded Young Playwrights Inc. to develop and promote the work of American playwrights aged 18 years and younger. His collected lyrics with attendant essays have been published in two volumes: Finishing the Hat and Look, I Made A Hat. Sondheim is the recipient of numerous awards for his extensive body of work. In 2010 the Broadway theatre formerly known as Henry Miller’s Theatre was renamed in his honour.

Produced on stage by Mackintosh, LES MISÉRABLES is the world’s longest running musical now in its 35th year in London. Produced on screen also by Mackintosh (along with Working Title and Universal), LES MISÉRABLES is now the most successful movie of an original stage musical. From 10th August – 30th November 2019 a spectacular staging of LES MISÉRABLES IN CONCERT with a company of over 65 will run at the intimate Gielgud Theatre next door, for which most performances are sold out. The new production of LES MISÉRABLES, with a separate company, is currently on a sold-out international tour which has recently been extended to Autumn 2020.

The acclaimed new production of LES MISÉRABLES first premiered in Cardiff in 2009 for the UK 25th anniversary tour and, apart from London, is the only version of the show produced by Cameron Mackintosh that has been seen around the world in the last ten years, having enjoyed record-breaking runs in Australia, Japan, Korea, France, Spain, Dubai, Manila, Singapore, Brazil, Mexico, Broadway and 2 North American Tours which are still continuing. The new LES MISÉRABLES will now re-open at the newly named Sondheim Theatre on 18th December 2019 with casting to be announced later this summer.