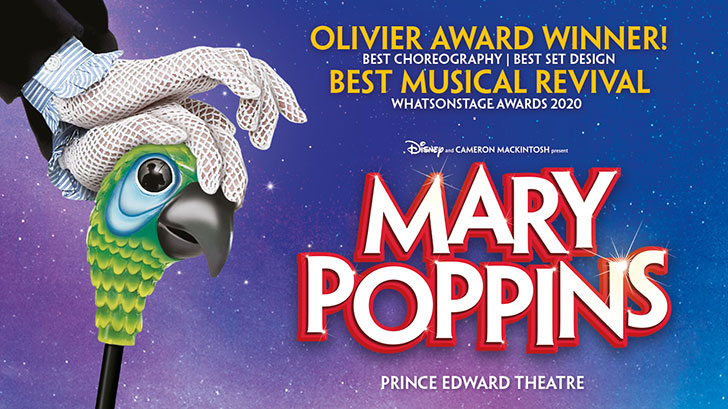 Public booking for Disney and Cameron Mackintosh's new production of MARY POPPINS will open at 10.00am GMT on 28th January 2019. The musical, based on the stories of P. L. Travers and the original film, returns to its original West End home at the Prince Edward Theatre after fifteen years. MARY POPPINS will begin previews on 23rd October 2019 with opening night on 13th November and initially go on sale until 29th March 2020.

Starring Zizi Strallen in the title role and Charlie Stemp as Bert, this internationally award-winning production has been praised by critics and audiences alike and seen by 12 million people worldwide. Further casting will be announced at a later date.

The stage production of MARY POPPINS originally opened in the West End in December 2004, running for over 1,250 performances. During this time, the production won two Olivier Awards and an Evening Standard Award. Subsequently the Tony Award®-winning Broadway production ran for over six years. This new production of the show will be seen for the first time in London following record-breaking runs in Australia, North America, the UK and Ireland, New Zealand, Holland, Mexico, Austria, Switzerland, Dubai, Japan and Germany, where the production recently entered its second hit year in Hamburg. MARY POPPINS is also the biggest hit musical ever in Italy where it is currently running in Milan.

Cameron Mackintosh said: "I am very excited to be welcoming Pamela Travers’ iconic nanny back to the Prince Edward Theatre later this year for audiences across all generations to enjoy. Since we originally presented the show, we have found even more magical ways to stage this timeless tale in this new production, and with the spectacular dancing talent of our two stars, I’m sure our audiences will find our new Mary Poppins practically perfect in every way. I first spotted Zizi in Matthew Bourne’s production of The Car Man and knew she would make a unique Mary Poppins, she went on to win terrific reviews on the recent UK tour. Charlie became an overnight star almost straight from drama school in my hugely popular production of Half a Sixpence which took him to Broadway to play opposite Bette Midler in Hello, Dolly! I am thrilled to have him back in London to play his dream role of Bert."

"London could not ask for a more enchanting leading couple than the remarkable Zizi and Charlie," said Thomas Schumacher, President and Producer Disney Theatrical Productions. "Cameron and I are so gratified that the show remains as beloved today as when it first came to life at the gorgeous Prince Edward Theatre 15 years ago. Its longevity and the huge success of the recent Disney film Mary Poppins Returns, remind us that the world’s love for Mary is deep and enduring."

The original music and lyrics by Richard M. Sherman and Robert B. Sherman include the timeless songs Jolly Holiday, Step in Time, Feed the Birds and Supercalifragilisticexpialidocious. New songs and additional music and lyrics are by the Olivier award-winning British team of George Stiles and Anthony Drew including the now classic Practically Perfect and Anything Can Happen. The book is by Academy Award®-winning screenwriter and Downton Abbey creator, Julian Fellowes and this production is co-created by Cameron Mackintosh. The producer for Disney Theatrical Productions is Thomas Schumacher.

This production of MARY POPPINS has orchestrations by William David Brohn with dance and vocal arrangements by George Stiles. It has a new sound design by Paul Gatehouse and new lighting by Hugh Vanstone and Natasha Katz. Co-choreography is by Stephen Mear. The reimagined set and costume designs are by Bob Crowley. Co-direction and choreography is by Matthew Bourne and direction by Richard Eyre.

The magical story of the world’s favourite Nanny arriving on Cherry Tree Lane has been triumphantly and spectacularly brought to the stage with dazzling choreography and unforgettable songs and a stellar cast. The stage version of MARY POPPINS is brilliantly adapted by Julian Fellowes from the wonderful stories by PL Travers and the beloved Walt Disney film.

Zizi Strallen was last on stage playing Fran in Strictly Ballroom The Musical at the Piccadilly Theatre. Her previous theatre credits include Follies at the National Theatre, Mary Poppins on tour in the UK, Ireland and in Dubai, Matthew Bourne's The Car Man and Cinderella at Sadler’s Wells and on tour, Cats and Scrooge at the London Palladium, Hairspray and Chicago at Leicester Curve, Merrily We Roll Along at the Harold Pinter Theatre, Rock of Ages at the Shaftesbury Theatre and The Music Man for Chichester Festival Theatre.

Award-winning Charlie Stemp has recently been seen in Snow White at the London Palladium and later this month he opens in a UK tour of Rough Crossing. His previous theatre credits include Barnaby Tucker opposite Bette Midler and Bernadette Peters in the Broadway production of Hello, Dolly!, the title role in the 2017 Palladium pantomime Dick Whittington and his critically acclaimed performance as Arthur Kipps in Half a Sixpence at the Nöel Coward Theatre, a role he first performed at Chichester Festival Theatre. His further theatre credits include Wicked at the Apollo Victoria and the international tour of MAMMA MIA!