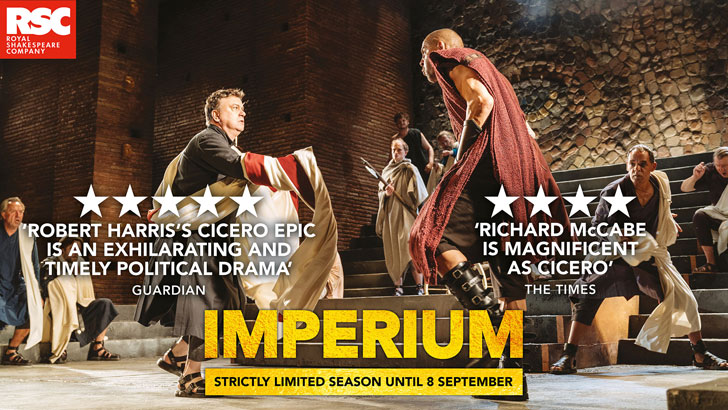 IMPERIUM I: CONSPIRATOR AND II: DICTATOR, TRANSFERS TO LONDON’S WEST END AT GIELGUD THEATRE THIS SUMMER

IMPERIUM -
I: CONSPIRATOR and II: DICTATOR

The Royal Shakespeare Company (RSC) and Playful Productions are delighted to announce the West End transfer for acclaimed, historical two-part thriller IMPERIUM - I: Conspirator and II: Dictator, running for a limited engagement at London’s Gielgud Theatre from 14th June to 8th September 2018.

Told through the watchful eyes of Cicero’s loyal secretary, IMPERIUM - I: Conspirator chronicles how the great orator’s early success unwittingly paves the way for a brutal and bloody end to the Republic.

With Rome in chaos at the beginning of IMPERIUM - II: Dictator, Cicero must use all his brilliance to restore the power of the Senate from the civic mob and their would-be Emperor: one Gaius Julius Caesar.

International best-selling novelist Robert Harris is known for historical fiction. In addition to his Cicero trilogy, his books include Fatherland, Archangel, Enigma, Pompeii and The Ghost, which have received major screen adaptations. His latest thriller Munich based on the 1938 Munich agreement, was published in September 2017. Harris is a former BBC correspondent and columnist for The Sunday Times and Daily Telegraph.

Gregory Doran has been Artistic Director of the Royal Shakespeare Company since 2012. His huge variety of directorial projects has not only included over 27 major Shakespeare productions, he also directed a Jacobean season of plays which won an Olivier Award in 2002, as well as classics from the UK and abroad. In 2013 he instigated the RSC’s “Live From Stratford-upon-Avon”, a new programme to screen productions live from Shakespeare’s home town, including the free streaming of the productions straight to UK schools. Gregory delivered the Richard Dimbleby Lecture for the BBC in 2016.

This theatrical event, co-produced by the Royal Shakespeare Company and Playful Productions, follows their last collaboration on Mike Poulton’s stage adaptation of Hilary Mantel’s Wolf Hall and Bring up the Bodies which enjoyed success at the Aldwych Theatre after its Stratford run and transferred to Broadway in 2015.

IMPERIUM is designed by Anthony Ward, with lighting by Mark Henderson. Music is composed by Paul Englishby, with sound by Claire Windsor.