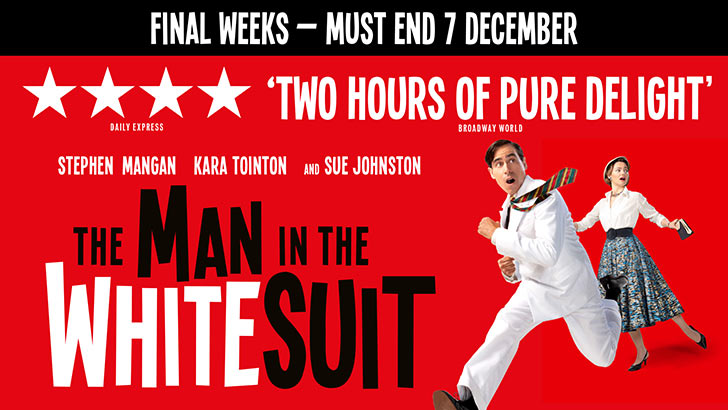 THE MAN IN THE WHITE SUIT

By special arrangement with Studiocanal

WRITTEN AND DIRECTED BY SEAN FOLEY, THE PRODUCTION WILL PLAY AT THEATRE ROYAL BATH AS PART OF ITS 2019 SUMMER SEASON FROM 5TH – 21ST SEPTEMBER, PRIOR TO OPENING AT WYNDHAM'S THEATRE IN PREVIEW FROM 27TH SEPTEMBER, WITH AN OPENING NIGHT OF 8TH OCTOBER

The full cast and creative team is announced for Sean Foley's hotly anticipated stage adaptation of classic Ealing Studios comedy THE MAN IN THE WHITE SUIT, which will have a three week engagement at Theatre Royal Bath from 5th September as part of its 2019 summer season before its world premiere at the Wyndham's Theatre, London with performances from 27th September 2019 until 11th January 2020 and opening night on 8th October 2019.

Leading the cast of THE MAN IN THE WHITE SUIT will be the previously announced Stephen Mangan as Sidney Stratton, Kara Tointon as Daphne Birnley and Sue Johnston* as Mrs Watson.

THE MAN IN THE WHITE SUIT is adapted for the stage and directed by double Olivier Award-winning writer, actor and director Sean Foley and has set and costume design by award-winning designer Michael Taylor.

Brand new songs have been written for this world premiere production by Charlie Fink, known for fronting indie-folk band 'Noah and the Whale' as well as being a composer for theatre and film including The Lorax (Old Vic) and A Street Cat Named Bob.

Choreography will be by Lizzi Gee, lighting by the Tony Award-winning Mark Henderson, sound by brothers Ben Ringham and Max Ringham, fights directed by Alison De Burgh and songs arranged by Phil Bateman.

When Sidney Stratton develops a fabric that never gets dirty and never wears out, manufacturers and trades unions are terrified by the threat it poses to their industry and their jobs. Only Daphne, the mill owner's daughter, shows Stratton any sympathy as his world gradually falls apart before he finally finds love and a new idea.

The 1951 iconic Ealing Studios comedy film starred Alec Guinness, Joan Greenwood and Cecil Parker. It was directed by Alexander Mackendrick and was nominated for an Academy Award for Best Writing (Screenplay).

BAFTA nominated and British Comedy Award-winning actress Sue Johnston's theatre credits include Small Change (Donmar Warehouse), The Master Builder (Albery Theatre) and The Play What I Wrote (Wyndham's). Sue has also played seasons at Manchester Royal Exchange, Bolton Octagon and the Bush Theatre. Best known for her television roles in The Royale Family and Brookside, other screen credits include The Cockfields, Hold the Sunset, Death on the Tyne, Murder on the Blackpool Express, Age Before Beauty, Walk Like a Panther, Good Karma Hospital, Moving On, Waking the Dead, Downton Abbey, Coronation Street, Rovers, Sex, Chips & Rock N' Roll, Goodbye Cruel World, My Uncle Silas, Brassed Off, Little Dorrit, A Passionate Woman, Sugartown and Jam & Jerusalem amongst others. Sue was appointed OBE in the 2009 Queen's Birthday Honours for services to Drama and to Charity.

Oliver Kaderbhai's theatre credits include Margot, Dame, The Most Famous Ballerina in the World (Kings Head), The Best Man (Playhouse), Jumping on my Shadow (Lakeside Arts Centre), Hatch (Polka Theatre), One Minute (The Vaults), The Provoked Wife (UK Tour) and Go to Your God Like a Soldier (Old Vic Tunnels/The Underbelly).

Katherine Toy's theatre credits include Coriolanus, Vice Versa and Salome (RSC), Much Ado About Nothing (Rose Theatre Kingston), As You Like It, Two Gentlemen of Verona and Stig of the Dump (Storyhouse Chester), Othello, A Midsummer Night's Dream and Cyrano de Bergerac (Grosvenor Park, Chester) and Life of Galileo, Cyrano de Bergerac and The False Servant (National Theatre). As a musician, her credits include Comedy of Errors (RSC) and Wild Orchids (Chichester Festival Theatre).

This world premiere production will reunite Stephen Mangan and Sean Foley who created the Olivier Award winning comedy Jeeves and Wooster together. Foley also teams up again with Michael Taylor with whom he created the five times Olivier Award nominated The Ladykillers. Foley's production will feature a cast of fourteen including actor musicians and a specially written score.

Based on the play The Flower Within the Bud by Roger MacDougall and screenplay by Roger MacDougall, John Dighton and Alexander Mackendrick, this world premiere production of THE MAN IN THE WHITE SUIT is presented by Jenny King, Jonathan Church, Matthew Gale and Mark Goucher, by special arrangement with Studiocanal.

*Sue Johnston will play the role of Mrs Watson for a strictly limited engagement until the end of November, with further casting to be announced.